Man has been using the bow and arrow as a hunting weapon for thousands of years. Stone arrow heads have been discovered in Africa that could date back as far as 50,000BC. It is unsure whether these were used with a bow or possibly something resembling a spear thrower.

Cave paintings from 30,000BC from Africa, Europe and Australia show early man clearly using recognisable bows and arrows from that time period onward. Flame hardened flint arrow heads dated to 25,000BC have been found which were attached to the arrow with twine, and the first evidence of feathers being attached to the arrow shaft come form this sort of time period, though they may well have been used even earlier.

From 8,000BC equipment began to go through development, and "tillered" bows (matching top and bottom limbs) have been discovered. Composite bows made from combining different materials to give better strength and performance were discovered from about 3,000BC. Animal intestines replaced twine as the material for making strings about this time.

Evidence of troops of infantrymen armed with bows and arrows have been found from about 3,000BC, and archers became the main form of distance combat until the rifle came to life in more recent times. 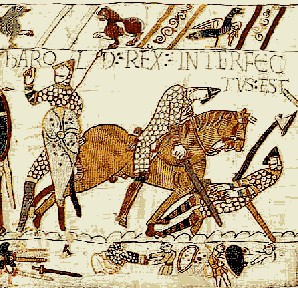 The Bayeux Tapestry shows King Harold killed by an arrow in 1066, though modern day investigations throws doubt as to whether the arrow struck the eye as indicated, or whether the tapestry has been altered to make it appear so, at some point in its life.

In England, it became compulsory for all able Englishmen to train with a bow and arrow on Sundays so that every man could be called up if necessary and already be ready to fight for his country. The power of the English long bow was first in evidence at the battle of Halidon Hill, where the English archers of Edward III defeated the Scottish army in 1333AD. Even the French crossbows were no match to the powerful English longbow, and the French suffered many heavy defeats against the English in the 1300's. In 1457, James II banned football and golf because it was discovered these sports were interfering with the compulsory archery practice, and in 1477, Edward IV banned an early form of cricket for the same reason.

In 1673, the 'Ancient Scorton Arrow' tournament was founded in Yorkshire and remains as the longest running archery tournament still in practice to this day. Clout archery made its first appearance in 1676, were longbows were used to aim at a white circular 31" target on the ground form distances between 180 to 240 yards.

The "Grand National Archery Society" (GNAS), the UKs governing body, was officially formed in Liverpool in 1861, having actually been holding meetings since the first one in York in 1843. Archery made its first appearance in the modern Olympic games in 1900 as a demonstration sport (men only) and as a full Olympic sport from 1904 when women were also allowed to compete. However, there were no international rules in place and each host country used its own set of rules. This lack of standardisation meant that 1920 was the last time it was an Olympic event for several years.

The "Federation Internationale De Tir A L'arc" (FITA), in English: "International Archery Federation" was founded in 1931, becoming the world governing body for the modern day sport. Once their international rules had been taken up by all countries, archery has again appeared as an Olympic event since 1972. Target archery using the recurve bow is currently the only style of Olympic competition.

At the AGM for GNAS in 2008, it was agreed that "Archery GB" would become the trading name for the GNAS, and since that time, the Archery GB branding has become the official emblem of archery in the UK.

This is a very, very concise and brief history of archery, and there are many excellent references available for those wanting to know more. For example, much of the information above has been extracted from one such reference on archery history: "A shot in time" prepared by the Australian Centenary Archery Club.