These equipment pages are an introduction to some of the common items of equipment used in archery today, mainly aimed at a beginner in the sport/hobby. There are much more detailed articles to be found on the web or in books.

There are several different types of targets used in the sport of archery. The most commonly recognised are the paper targets; known in the sport as faces; but there are also others as described below. In flight archery, no target as such is used at all, as the objective is to shoot as far as possible as opposed to shooting at a target.

This is possibly the most recognised type of archery target. It is used in all FITA rounds as well as all GNAS indoor rounds and GNAS outdoor metric rounds. 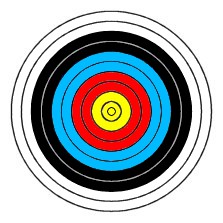 The target face uses the 10 point scoring system, so each colour band on the target face has two scoring zones, as follows (centre to outer edge):


The size of the target varies depending on the type of round being shot and whether this in an indoor or outdoor event. Commonly sizes include 122cm, 80cm, 60cm and 40cm. 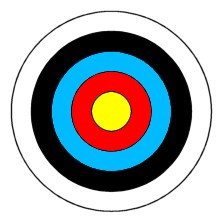 In practice, a metric 10-zone target is often used, but the scoring for imperial rounds remain as described above, ignoring any division in the coloured rings. Again, the size of the target varies depending on the type of round and distance being shot.

This target is specifically used for the FITA Vegas round. 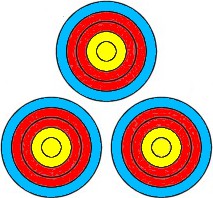 One arrow is shot at each target in turn: (1) bottom-left, (2) top, (3) bottom-right. Arrows are often uniquely marked or numbered by the judges in competition, so that it is possible to ensure that the correct target was hit in the correct order. If an arrow hits the wrong face, it scores zero, no matter where in that face it ends up. If two arrows appear in the same target and there is no identification marks, the lower score counts and the other arrow is scored as a miss.

The use of individual target faces like this, is to try and avoid the chance of shooting a "Robin Hood" by skilled archers (where an arrow hits another arrow already in the target), which usually results in one or both arrows being damaged. This is an expense they could do without. A similar target with the three faces in a vertical row (not triangular formation) is also in some rounds for the same reason.

Clout archery is an outdoor sport where the objective is to get your arrows as close as possible to a marker placed in the ground, usually some sort of flag in a highly visible colour. 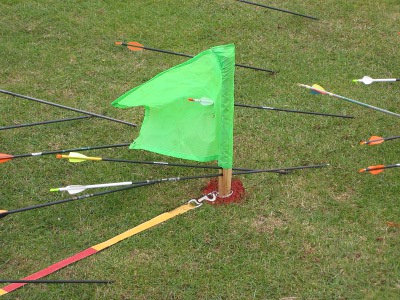 Here you can see a couple of arrows hitting the flag pole and one through the material of the flag itself. Although obviously a good shot, its tip still struck the ground a distance away from the base of the pole, so would not have scored maximum points. The coloured strap can be moved around the pole and it's different coloured sections are used to judge distance from the base of the pole for scoring purposes.

The Worcester is a GNAS indoor round which uses its own style of target. This is somewhat different to others above and is 16" in diameter with a white on black face. 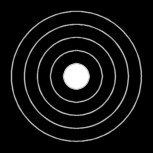 Scoring is as follows (centre to outer edge):

Mostly used for sport shooting, these are often life like targets which can be full sized or scaled down. Usually depicting an animal, but may be of anything suitable as a target.

3D targets usually have scoring zones, often related to head, heart and lungs representing a "kill" achieving higher points, with other areas representing injury zones scoring lower. Our club does not do any 3D target shooting so you are advised to look elsewhere if you require more information on the subject.