There are several recognised disciplines in archery, which are briefly described below:

This is the main type of archery available at the Bowmen Of Leeds club. There are two main ruling bodies for target archery, FITA and GNAS/Archery GB. We can follow both codes, but generally shoot a GNAS Portsmouth round, as at a distance of 20 yards, it fits within the distance available at the hall and is usually achievable during a normal evening shooting session.

Indoor rounds tend to be shot at a single distance, although the Combined FITA round is shot at both 25M and 18M distances.

Our club has occasional access to the local cricket club where we can set up an outside shooting field, normally of 60M but 80M is possible if required. Both the FITA and GNAS bodies describe multiple different rounds and we are able to set-up for many of these as required, for example if preparing for a competition. 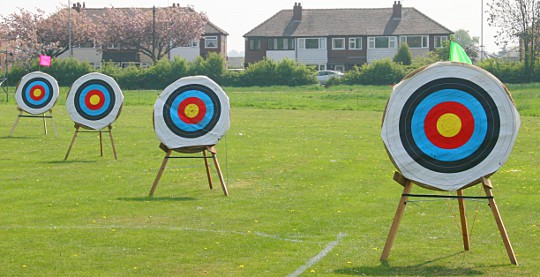 Many rounds are shot over different distances, where you begin shooting at the longest distance then working down towards the shortest distance. The course is generally flat with no obstacles. See our Scoring pages for details of the different rounds available.

Unlike the flat course of target archery, field archery is shot over an undulating course usually with obstacles, such as in a wooded area. Targets are flat with circular faces and may be above, level or below the archer's standing position. The distance to a target may be marked (known) or unmarked (unknown distance), where it comes down to the skill of the archer to judge the distance and adjust their aim accordingly.

Archers normally stand with one foot touching a peg in the ground (there may be pegs at different distances. for gents, ladies and juniors). Course designers often like to position some targets behind objects such as trees, so that the archer may have to bend to see the full target whilst keeping contact with the peg, simulating hunting conditions where the prey may not be helpful by standing in a clearing to be shot at!

Very much in the same format as target archery (above), but the targets used in 3D archery are not flat, but rather 3D, often representing full sized animals, but may be of any shape and size the organisers desire, and I have seen examples such as alien beings from another world being represented.

These targets may have several scoring zones, where the highest scores are for areas that represent a "kill" (such as the head or other vital organ areas) and lower scores given to nonlethal parts of the target. Some parts of the target may not score at all even if hit, like the legs or tail.

Our club has no facilities for field or 3D archery, so the information here is for reference only.

This is archery in its basic form. There is no actual target here, as the objective is to fire the arrow as far as possible. Therefore a very large area is required to set-up a flight archery field, and the club does not have access to such facilities. Distances. of well over a kilometre can be achieved, so you need a big field!

Competitions are split up by bow type, and any type of bow can be used. There are even specialist bows for flight archery, but they are not made in large numbers and prices are very expensive. These bows tend to be more powerful versions of the normal bows, built specially for distance, with stronger arrows to match.

I'm pleased to say we have younger members in the club who are junior flight archery champions, so well done to them.

In format, this is similar to flight archery, except that rather going for distance, archers try to shoot as close as possible to a flag set into the ground. Again, all types of bow can be used for this sport.

Other forms of archery

There are many other forms of archery, including Crossbow, Ski Archery where competitors combine cross country skiing with archery, and Run Archery which is similar except competitors combine cross country running with archery. There also exists many forms of ceremonial (e.g. Kyudo Archery) and ancient archery, which I leave for the reader to research elsewhere if you are interested.

Archery Hunting is popular in many parts of the world, but it is ILLEGAL in the U.K. As a club we believe this is absolutely the correct decision, and we do not wish to support or promote such activities. That form of the archery is dominated these days by the use of the more powerful compound bows, because of their higher shooting power in a smaller and lighter bow form. Arrows tend to be stronger and heavier to give the necessary killing power and are usually fitted with larger and stronger arrow heads of typical arrow-head design that children draw in pictures, again to improve the killing ability of the weapon.